Elevator Pitch:
Three newly venerated mercenaries make their way through a mysterious island riddled with sociopolitical and
magical turmoil in an effort to get back home. – Usagi Yojimbo and Samurai Jack meets Star Wars the Clone
Wars(the 3d one not the 2d one) and Warrior princess Xena.

Back Story:
The isle of Jaelda appeared in the center of the Caspian Ocean seemingly over night, and it’s been fought for ever
since. The isle is a haven for those cast out by their countries, and a much sought after prize for rulers and warlords
that wish to take advantage of its position in the center of the world. But time after time those who wish to claim
Jaelda are beaten back by its inhabitants. But the fight of the people of Jaelda is on two fronts, as creatures and
magics unknown to the world at large rest within the island, and slowly but surly, they are beginning to wake.

Overview:
Children of Jaelda will focus primarily on Serin’s Band, a group of three sisters that take odd jobs, and deal with
magical/ sociopolitical happenings. All while making their way back to their hometown in the center of the island.
One day the band might reunite a skeleton priest with his body, the next they could raid a tomb. The isle is as vast
and varied as its inhabitants, and there’s no telling what’s around the next bend.

The ties that bind.

What/who we’re attached to, can overtake who we are and what we want to be, And we often spend our entire lives
finding a balance between our attachments and who we wish to be relative to them. And what better of a way is
there to explore this concept then with petty feuds, forbidden magic, and post war hysteria?

Tone and Style:
The visual style will be reminiscent of classical fantasy (Lord of the Rings, Dungeons and dragons), with a hint of
colonial America. Most of the story will take place on Jaelda, which is dotted with lush forests, disgusting swamps,
arid deserts, majestic mountains and merciless tundra.
The tone of the series will fluctuate as the circumstances of the protagonists fluctuate. Every good day is made
better by the horrible ones that preceded it. And every job well done is amplified by the previous botched jobs, that
you don’t tell any one about because that may compromise your future employment. 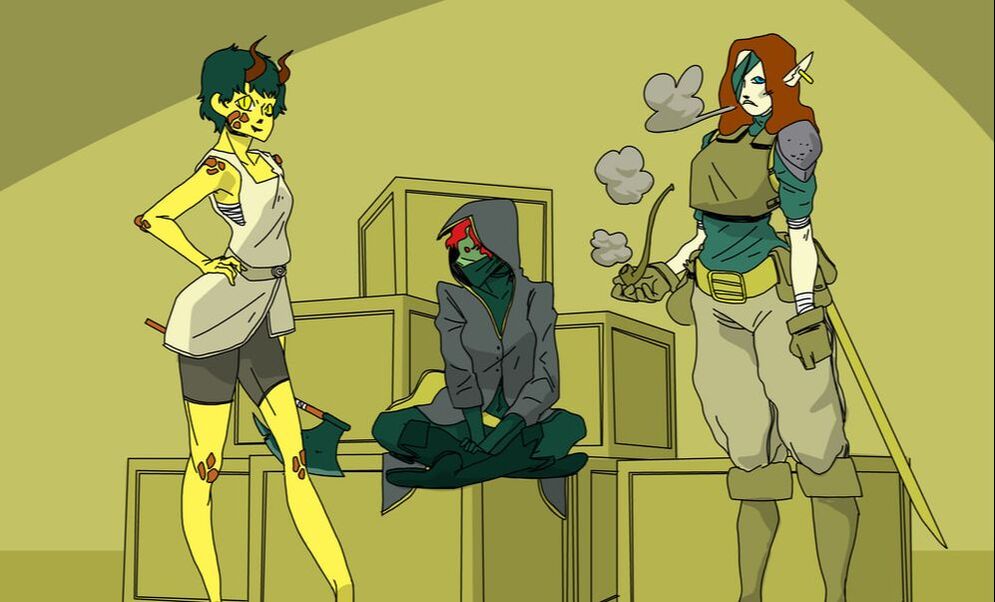 Talus the Half Dragon:

After witnessing a fight between a mercenary and a bounty head, Talus knew her calling. In trying to spare their
daughter of the damages of her aspirations, Talus’s parents put her through a grueling physical gauntlet, that, if she
succeeded she would be granted their permission to pursue her dream as a mercenary. To her parents’ dismay, she
passed with flying colors. To her dismay fighting is about 30% of a mercenary’s job. She hates being told what to
do. She hates being sidelined in the name of subtlety, and she hates having to pay for all of the collateral damage she
causes. But when she can cut loose, you’d better hope she’s on your side.

Talus can breathe fire but with have a stomachache if she over extends herself. Her dragon skin is extremely dense,
only magic and the most highly sharpened swords can penetrate it. The claws on her hands and feet are retractable
and can work as slashing weapons by themselves. Over time she is able to grow wings and fly, and at the height of
her ability, she can turn into a full sized dragon for a short period of time. Her axe, which she won in a gamble, can
extend its handle to ludicrous lengths, and can be called back to her hand at any time (essentially mjonir). 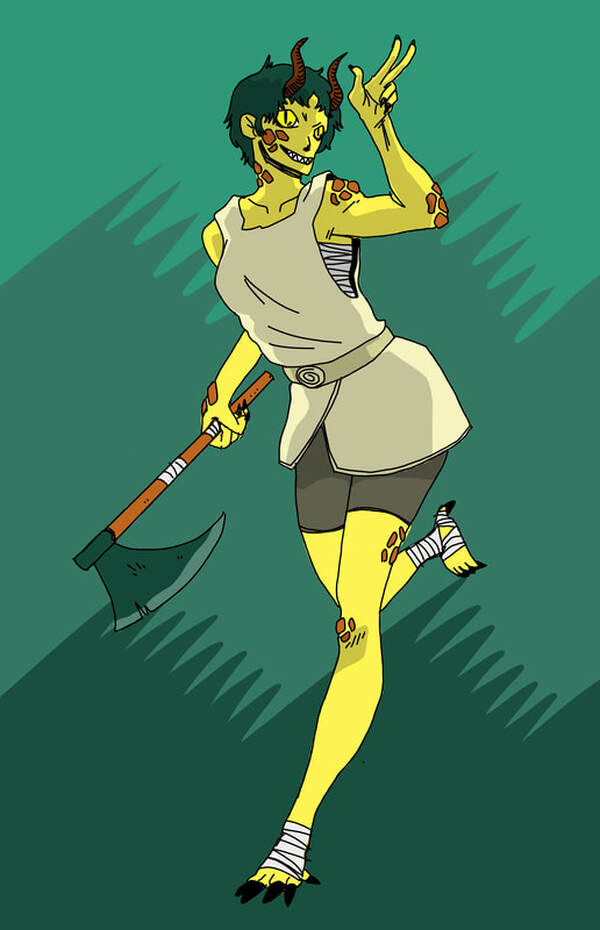 Plalmia took to being a mercenary the slowest. And she only agreed to become one in order to stay close to her
sisters. But the Jaeadian war quickly taught her that she had to fight for what she believed in, and nobody else
would do it for her. She doesn’t look fondly on everything she’s done. But if it would keep her family safe, she’d do
it again in a heartbeat.
She’s the assassin/Intel gatherer of the group. She’s Intermediately proficient in Transmutation, and can detect
particular types of magic. Her tongue is cursed and if she speaks above a whisper, those who hear it will be cursed.
Because of this, she talks as little as possible. Her carbon shell is thinner than human skin and because of that, she’s
more fragile. She can only eat living things or things that have recently died in order to get any sustenance. She’s
equipped with two wrist blades, a living chain, and a pouch full of herbs and throwing knives. 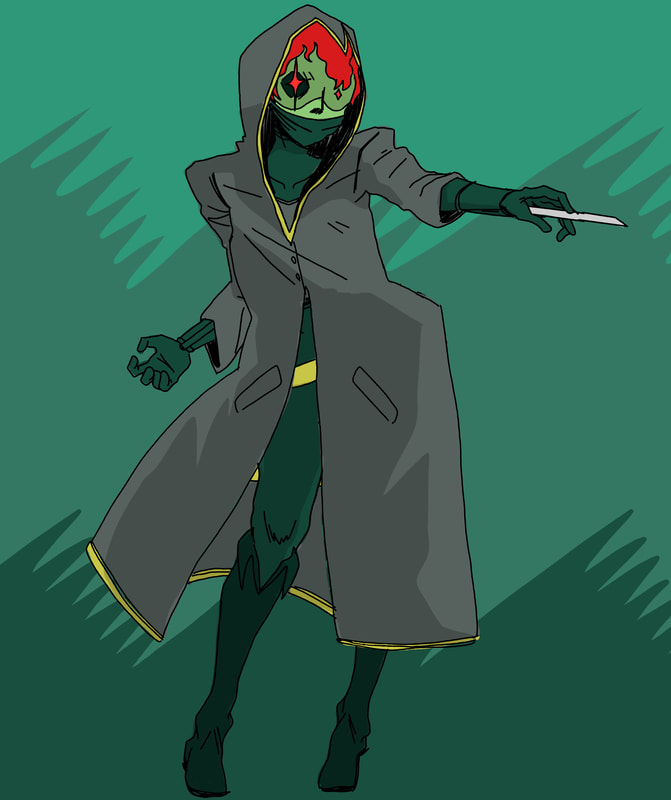 Serin the Half Elf.

Serin learned two things very quickly in life. First, money is the only thing that matters. Second never trust anyone.
These maxims are the only things she’s been able to rely on for her entire tenure as a mercenary. Because of this
she’s extremely money focused, to the point of having a fully written contract on her person at all times. Despite
her convictions, she’s very laid-back and under reactive. Because of her convictions, she’s ruthlessly logical, long
game oriented, unforgiving, and emotionally distant.

Serin is a master negotiator, tactician, cobbler, and sword fighter. She can identify the quality of jewelry and gold
with minimal effort. She smokes black rot weed to keep the god imprisoned in her soul at bay, but also because she
enjoys it. If she goes more than 72 hours without smoking she gets irritable, after 86 hours she gets sick. She wields
an Elvin Blade modified to separate into a serrated whip that’s 5 times it’s 4 ½ foot length. 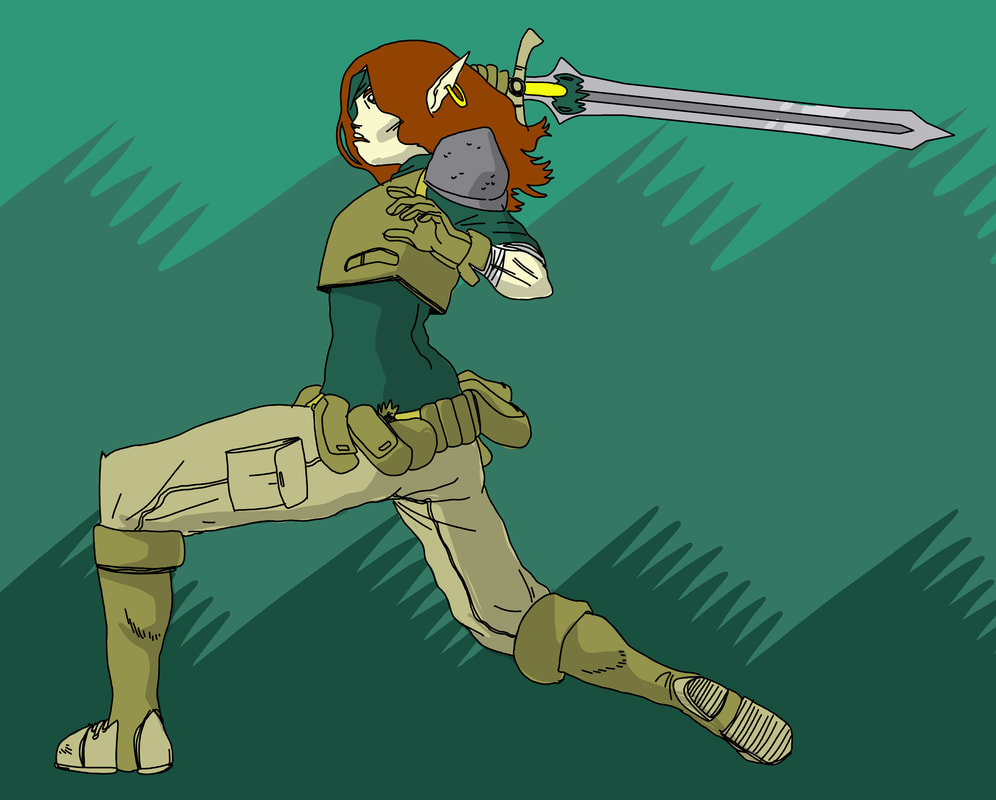 Format:
Children of Jaelda will be a 10 part series (roughly 25-30 colored pages per issue). Aimed at young adults (14-18)
The book also serves to address Rising Sun Comics lack of any fantasy genre stories currently in its stable of comics.
The first arc will be episodic in nature, with the only major through line being a slow progression to the
protagonist’s hometown.

0. The Orphan Isle.
They finish up the war and start to head home. The 4th Jealdan war has ended, and Jealda has won its
independence. In honor of this, its mercenaries have been paid a pittance, and have been sent on their way. Three
mercenaries being, Talus, Plamia, and Serin of Serin’s Band.( I’d Like to release it for free to hype up the full release
of issue 1. This could even be released on free comic book day and this could be included in a trade later)

1. Mud and Bones/ The Tortured Mass.
Serin’s band is hired to escort a baker outside of her village, while they’re doggedly pursued by a beast that refuses
to die. Much to Talus’s delight.

2. Old Bones.
The band finds a talking skull on the side of the road. At Palmia’s behest, and a 10,000 gold reward, the band heads
up the mountain to find the rest of the skeleton’s body.

3. Left to Rot/ Abandoned
While taking inventory of a recently purchased tomb, Palmia is trapped inside of a deeper tomb with a creature
thought lost to time. Her only hope is if her sisters can unlock the tomb’s secrets.

4. The Executioner/ The Guilty
After Serin’s band imprisons a bounty head calling himself “The Executioner”, he escapes and hunts down those
who would delay his “Justice”.

5. Oak Weaver/ Thenica
After Talus steers the band’s wagon down the wrong road, Serin’s band is stuck in the forgotten town of Thenica.
And they aren’t the only ones there.

6. The Bridge Warden.
Upon reaching a bridge Serin’s band is met by a remote construct that will destroy the bridge if any of them get too
close. The band must now find a way to remove the construct without destroying their only easy means of getting
to the other side of the island.

7. The Lover’s Grimoire Part 1
Serins band comes across a sentient book, and an unconscious traveler. Little did they know that the two would lead
to their most dangerous, and their most profitable job yet.

8. The Lover’s Grimoire Part 2
The two lovers, cursed by the lover’s grimoire travel with Serin’s band in an effort to get to a safe haven by the
eastern coast. However there are those that want the book for their own purposes.

9. The Lover’s Grimoire Part 3
Upon arriving at the lovers homestead, Serin’s Serin’s band and the lovers must surpass one final obstacle before both parties can return home.

Volume 1 will be roughly 270 pages long in its totality.
Finished Pages 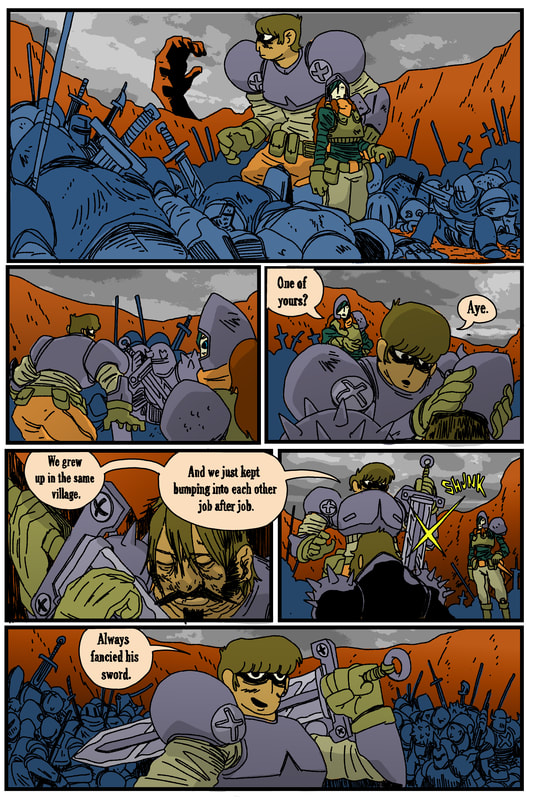 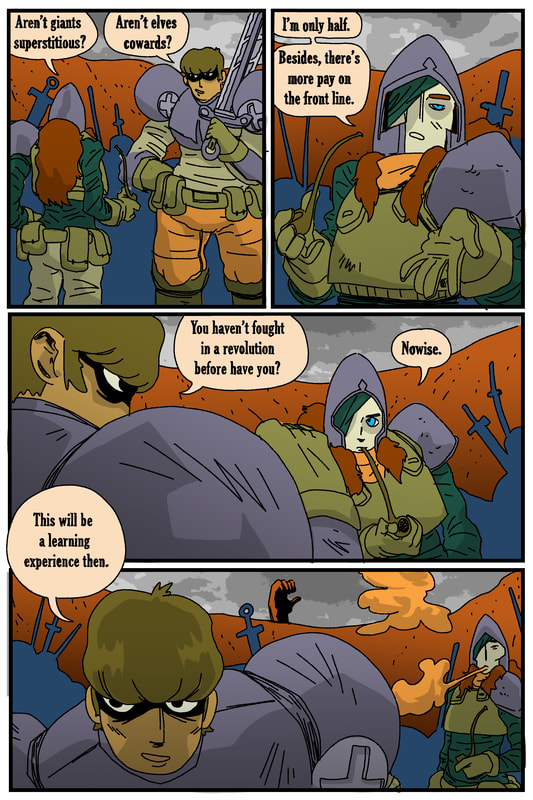 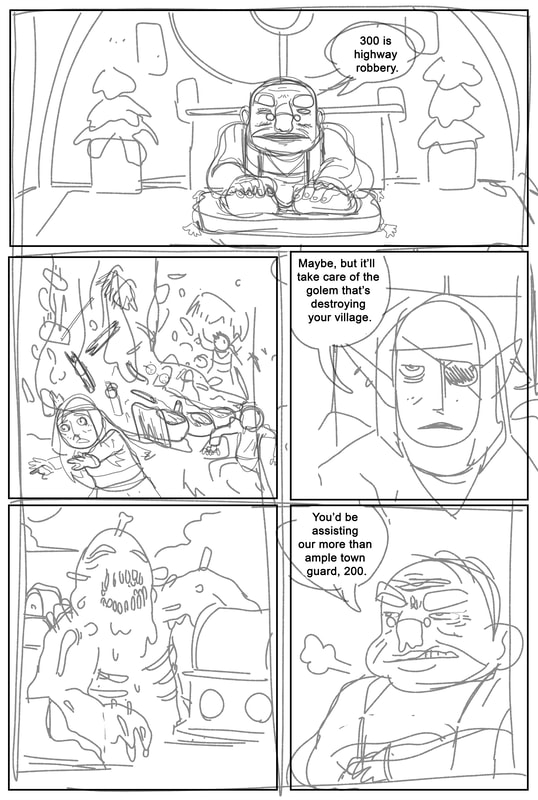 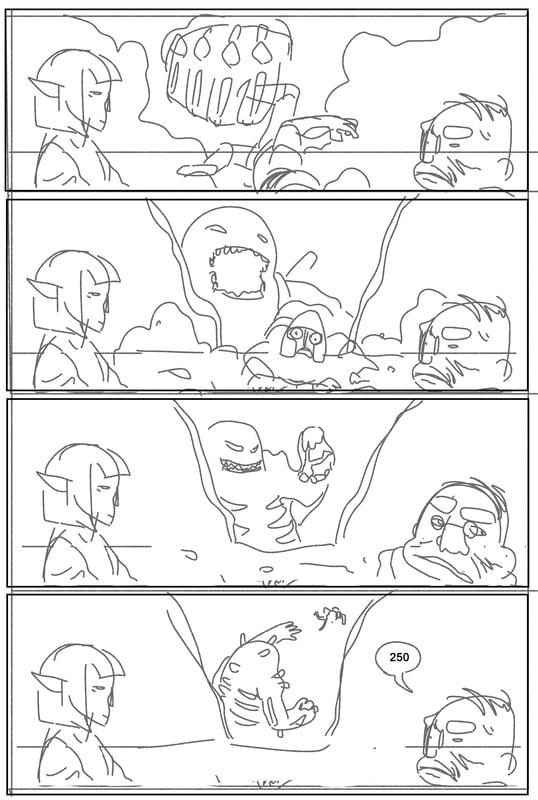